How Convercent Built Their QA From the Ground Up - TestRail 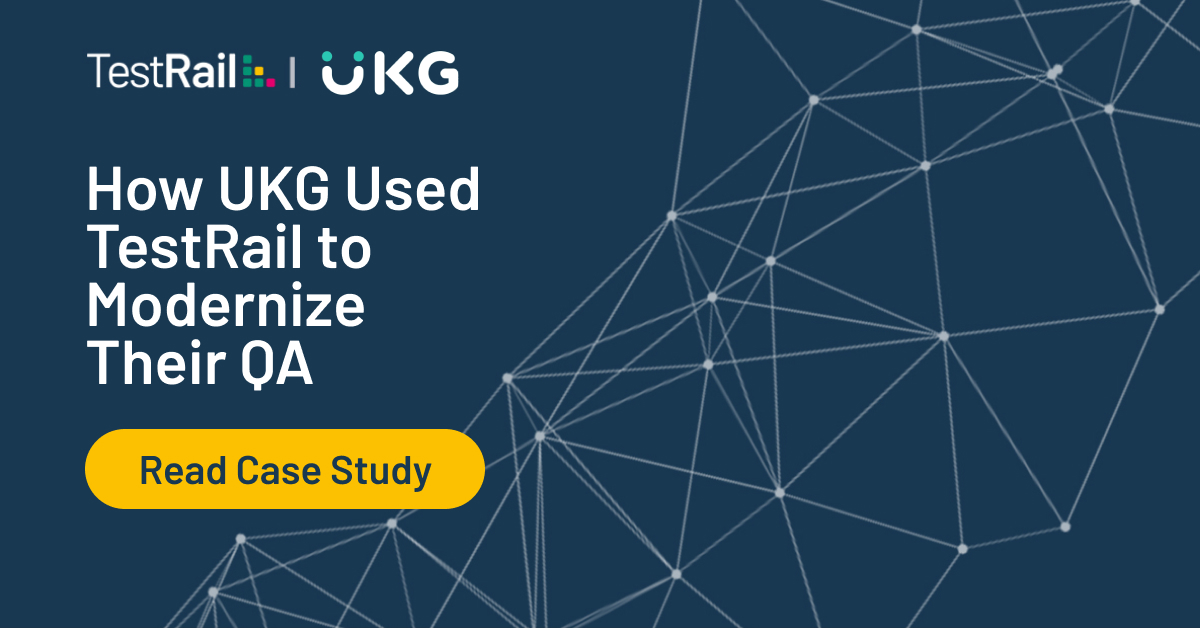 Learn how TestRail has given the Convercent team a scalable solution that supports their growing QA team and helped them standardize their test management in a centralized system, maintain meaningful communication between departments, and get higher-quality releases out the door faster.

Or take a tour

How Convercent Built Their QA From the Ground Up

Convercent is a global SaaS company recognized as the premier provider of enterprise software that helps other companies design and implement compliance programs. With 140 employees, the company’s governance, risk management, and compliance platform is used by more than 6 million people across nearly 150 countries around the globe.

Before the QA team at Convercent started using TestRail in 2019, the company was very much in startup mode. They were moving quickly to gain market share and had not adequately invested in organizing their testing processes. Because of the fast pace, collaboration across the team was getting more difficult and their test management procedures and systems did not match their expansion.

“Everyone was making their best effort to ensure we were testing the product to the level needed to protect the customer experience. But we did not have a definitive way to confidently report that we had protected the customer experience. The QA professionals were uncomfortable with the situation and wanted to do better because our product gives a voice to the voiceless. We all feel strongly about our company mission.”

One problem with the spreadsheets they used at the time was that they lacked important test-related details. Because of the speed with which the team was delivering features, testers didn’t have the time to fully document their testing strategy. When a defect did leak into production, it was tedious to investigate and identify how to prevent the defect from being reintroduced. This also meant that strategy could not be subjected to peer review. Jordan states,

Another part of the challenge they faced was that the testing workload was greater than their understaffed QA team could accommodate. Jordan explains, “Before TestRail, only QA team members could execute test cases.” This created a bottleneck that slowed down releases, threatening revenue and causing frustration among the QA team as well as the rest of the company.

By switching to TestRail, Convercent’s QA team was able to fully document test cases so that non-QA staff could assist with test execution and reduce their delivery bottleneck. Documenting test cases in TestRail also allowed QA engineers to get feedback from software developers and product owners, which improved the quality of the test cases. TestRail also provided real-time visibility into their testing progress for new releases, while TestRail’s API allowed them to integrate their entire development and testing toolchain, including  Jira, Jenkins, and their proprietary automation framework.

“TestRail improves our collaboration, efficacy, and application quality, which in turn provides the best customer experience.”

With TestRail, Convercent was able to standardize test management in a centralized system and streamline their testing workflows. TestRail allowed them to document all their test cases in a single place, write repeatable test cases in a structured format, and record test results in a consistent format. More importantly, by giving everyone on the team access to TestRail, they were able to have more meaningful communication between departments, better collaboration across the QA team, and improved visibility into testing efforts.

Get Real-Time Visibility Into Testing Progress

With real-time visibility into testing progress, Jordan was able to start managing workload across the team much more easily, identify blockers faster, and help team members working through complicated issues. She explains, “I use TestRail to help predict workload. I see how many new test cases we write on average per month and it helps me know if we are on track or being outpaced by development. It also allows me to know who is working on a complicated feature and check in on my testers.”

“Sometimes they (my testers) ask, ‘how did you know I was stuck?’ and I say ‘it’s magic!’ But really, the magic is TestRail.”

Moreover, giving non-QA project members visibility into the testing workload helped to identify delivery team activities that could speed up the testing phase and support requests to hire more QA professionals. This greater understanding of what is involved in testing aids in conversations related to individual velocity in sprint planning.

The new visibility that came with TestRail also gave the Convercent team a level of flexibility they lacked with spreadsheets. With just one feature tester per delivery team, Jordan points out, “If a person gets sick prior to a deadline, I am able to ask another QA person to execute those test cases in TestRail, which keeps the project on schedule. If we need testers to quickly swarm on a testing effort for an urgent customer request, TestRail supports that.”

Integrate with Test Automation and Jira

As their QA department has expanded delivery team sizes and budgets, TestRail has provided the stability to support key strategic initiatives, like building out a test automation strategy. According to Jordan,

“We start by writing our test cases in TestRail. We use TestRail custom fields to indicate which test cases are automatable and which ones have already been automated. We use metadata to filter for cases that are in need of an update to keep them in sync with the automated tests. We use test runs to create the list of cases that need to be updated, assign the updates to a tester, and record when updates are complete, by using the execution status field. Used this way, TestRail is supporting the project management of the automation effort.”

TestRail allows the team to plan, execute, and report on tests they have automated alongside tests that they run manually.

One of the goals for Jordan and her team was to decrease the amount of time needed to deploy their application to production.

“Before using TestRail, the deployment process took six hours and eight people. Since adopting TestRail and using the TestRail API to integrate with our DevOps scripts, now, a deployment takes three people and 90 minutes to complete. TestRail is a large part of that time reduction.”

Convercent has also leveraged TestRail’s Jira integration for traceability and compliance. Jordan elaborates, “From a ticket in Jira, one can click on the TestRail link, to view the test cases, test run, and test plan.”  Testing traceability has also been important to obtain certifications such as HITRUST. Jordan explains,

“My recent conversation with an auditor started with him selecting a Jira story ticket and asking me to walk him through our testing process, presenting evidence along the way. From the ticket, I clicked the test case link which opened TestRail. I was then able to show the evidence required. The evidence proved that no new code goes out to production without being subjected to testing in multiple environments and on multiple browser types. The auditor was very happy.”

TestRail has supported their ability to get certified for HITRUST, which is crucial for their organization because, “some potential customers can only consider vendors who have specific industry certifications.”

By streamlining their test process, improving visibility, and leveraging TestRail’s integrations with test automation and Jira, Convercent’s QA team was able to organize their testing process, gain visibility into their testing so that they could reduce bottlenecks, communicate with each other better, accomplish more testing, and manage resources on their team to meet their deadlines. They were also able to decrease the amount of time that it took to test and deploy applications and reduce the risk of defect leakage.

TestRail has also helped the team successfully transform the culture around quality across the Research and Development department. TestRail is at the center of the cultural changes shaping the way they understand and interact with the QA team. According to Jordan,

“I used TestRail to demonstrate for (non-QA) project members the amount of effort required of QA engineers, and some productive conversations have resulted. Before TestRail, QA throughput was always brought up as a pain point or a problem within Engineering. Now, we have a narrative that is clear for people to understand. QA is no longer perceived as a mysterious bottleneck.”

TestRail has facilitated greater shared responsibility so that quality is not strictly owned by QA, but by the entire team. It has also empowered their QA team to have more meaningful conversations about quality with product owners and developers and helped them build quality into their development process from the outset.

Thanks in part to the tremendous efforts of the QA team, Convercent was acquired in April 2021. They are using TestRail to help scale their QA team and planning to double in size over the next 6 months. Ultimately, TestRail has given the Convercent team a scalable solution that supports their growing QA team and helped them standardize their test management in a centralized system, maintain meaningful communication between departments, and get higher-quality releases out the door faster.

TestRail is the Leader in
Test Management

TestRail is the leader in the annual 2021 G2 Grid for Test Management and Software Testing, with the highest ratings for best results, most implementable, and overall enterprise leader as well as Fall 2021, Summer 2021, and Spring 2021 G2 Grid.*

For more independently verified research and reviews, visit the TestRail page at G2, TechValidate, or Capterra.