TestRail provides the ability to customize the user interface via so called UI Scripts. UI Scripts are a very flexible tool for administrators to customize parts of TestRail’s design and behavior by writing standard JavaScript code and by defining simple style sheets.

UI Scripts can be applied to single pages, multiple pages or even the whole application. You don’t need a special development environment or framework to write UI scripts, as you can simply define and test scripts directly in TestRail. Basic HTML, CSS and JavaScript knowledge is required to write UI Scripts, but it’s possible to learn this while writing your first simple scripts.

The full contents of a UI script is loaded in the browser for pages to which the script applies. Exercise caution when including tokens or credentials in your UI script in order to prevent TestRail users from being able to view this information.

Please note: We don’t consider the DOM or HTML structure of TestRail to be part of an API, so it’s possible that changes in newer TestRail versions may break your existing UI Scripts. That said, if you keep your UI Scripts simple and write them in a robust way, TestRail updates are less likely to have an impact on your UI Scripts. If you plan to write any non-trivial & critical UI Scripts, it’s recommended to set up a TestRail staging system to verify updates.

Before you continue reading: We do have sample UI Scripts available in our public GitHub repository. You may find a script which already suits your needs or which only needs a few simple changes. You can find this repository here.

UI Scripts can be defined in TestRail under Administration > Customizations. To start writing your first UI Script, click on Add UI Script and the editor will show a basic example. 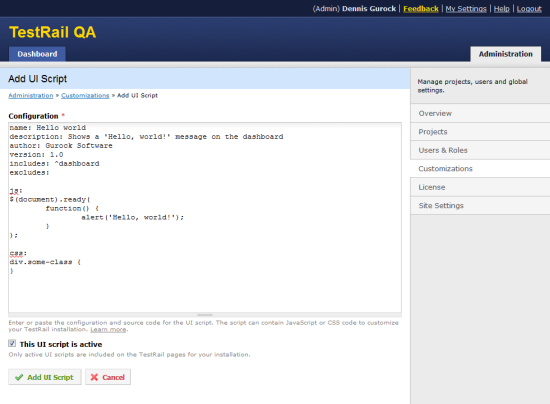 As UI Scripts are simple text blocks, you can directly define all meta information such as the name, author or version as part of the script. This allows you to easily share UI Scripts between TestRail installations by simply copying & pasting the script.

The first block of a UI Script contains some meta information that describe its functionality as well as define its scope (i.e. the pages to which the script is applied to).

The name attribute is used as the script’s display name in TestRail’s list of UI Scripts, whereas description, author and version are merely intended for informational purposes for the developer.

The includes and excludes attributes define which pages the UI Script is applied to in TestRail. You can thus limit the scope of a customization with these attributes and execute a UI Script on specific pages only.

There are a few rules regarding how the filters are applied:

There’s one exception to these rules: UI Scripts are never executed on the UI Script form itself to make sure that you can disable broken scripts if needed.

TestRail directly applies the style sheet to all pages as defined by the scope. You can therefore use the full set of available CSS features to customize TestRail.

For more complex customizations you would usually use JavaScript in addition to or instead of style sheets. To define JavaScript code in your UI Script you can simply use the js attribute as follows:

TestRail comes with the popular jQuery JavaScript library, and you can use jQuery’s full set of features. For example, it’s generally a good idea to use jQuery’s $(document).ready() event to wait until the current page has been fully loaded (as you can see in the above example).

TestRail provides some additional context information that you can use from your JavaScript code, such as details about the current user or project. You can use this context information to limit the execution of your scripts to specific user roles or projects, or leverage this data for integrating with external tools. The following context attributes are defined:

You can access the context information from your scripts as follows:

Starting with TestRail 3.0, uiscripts.context contains additional details about the context of the current page and this can include:

Also new in TestRail 3.0 is uiscripts.env which contains details about the environment TestRail is running in. The following properties are available for uiscripts.env:

As powerful and flexible as UI Scripts are, it’s important to understand the performance implications of your scripts and customizations. Using generic JavaScript selectors (e.g. applying code to all divs on page) can severely slow down the execution of JavaScript and increase the load time of pages.

As a general rule of thumb you should limit the execution of UI Scripts to the pages you actually want to customize, and to define the selectors for your JavaScript code as precisely as possible. The discussion of general JavaScript performance tips is outside the scope of this article, but there are some good resources about JavaScript and jQuery performance out there.