If you want to make a copy of test cases to rerun a test, we strongly recommend using the same test cases in a new Test Run instead. If you want to retest the cases in an existing test run, you can even select “Rerun” from the toolbar of your existing Test Run.

Test Plan Configurations work best when you need to test the same basic steps against each configuration. However, if different browsers / operating systems require different test steps, then we recommend you to create copies of the test case instead.

Test Plans can be found under the Test Runs & Results page.

The most basic way to move or copy test cases within the same test suite is to click and drag the test cases on the Test Cases page.

Once you drag the test cases to a new area, you will be prompted to choose where you would like to move your existing test cases, or create a new copy of your test cases in that location. Simply select the option from the pop-up menu to finish either moving or copying your test cases.

If you’d like to skip the pop-up menu, use the following keyboard shortcuts:

These same operations apply to moving or copying whole sections in the main content area as well as the sidebar on the right.

Move a single test case within the same project

To move a single test case, you can drag & drop the case. To do this, simply drag the little grip icon on the left of the checkboxes.

If you want to move test cases in the sidebar, simply use drag & drop. 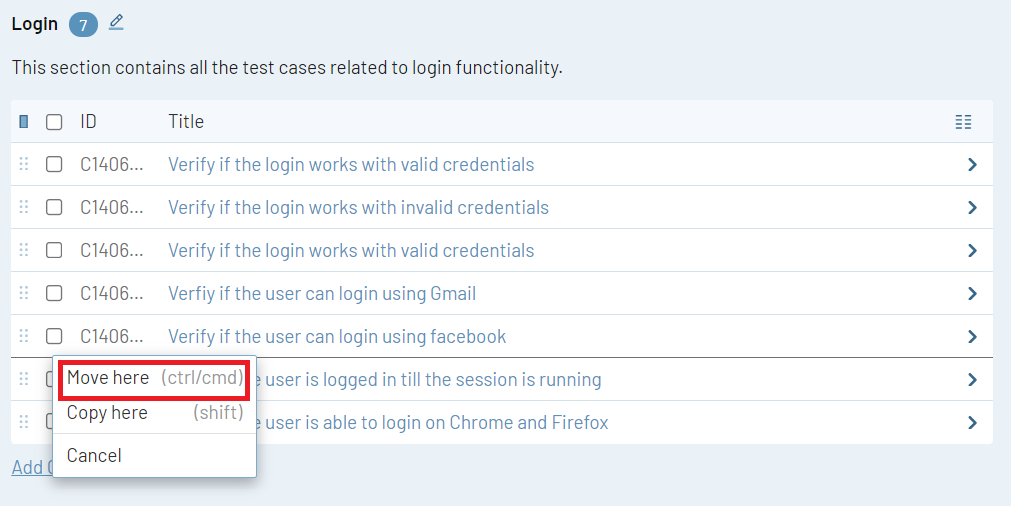 Move a test case section within the same project

If you want to move test cases or entire sections from another test suite, simply open the Copy or Move dialog from the toolbar of a test suite (it’s the little icon with two sheets of paper in the toolbar). 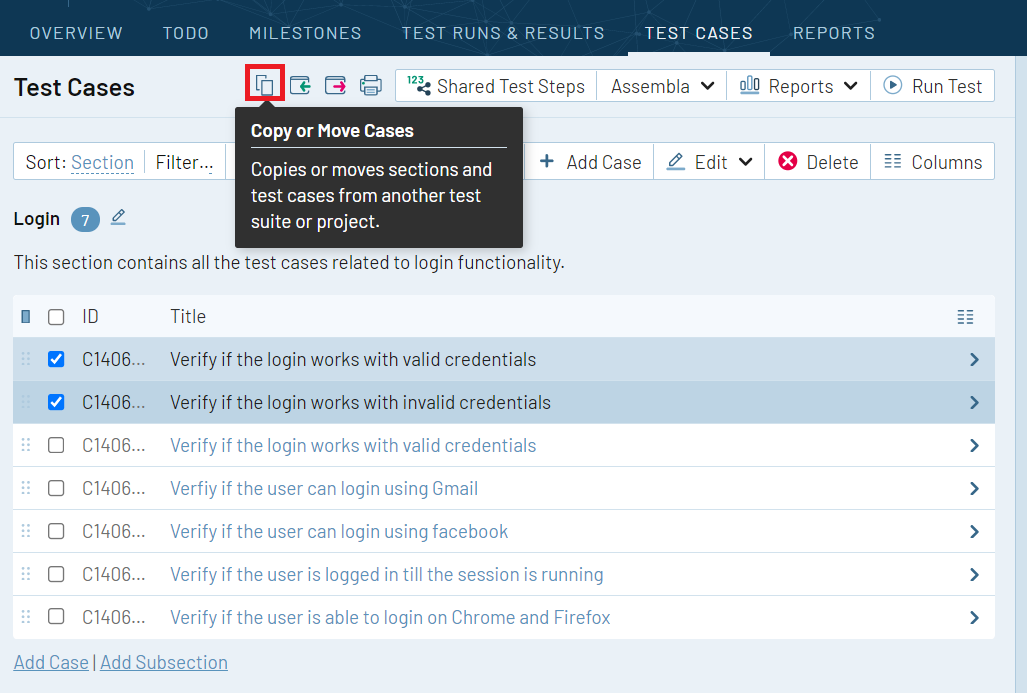 You can select the ‘Source’ from the drop-down menu. The Source is from where you want to copy/move the test cases and the destination is the current folder. 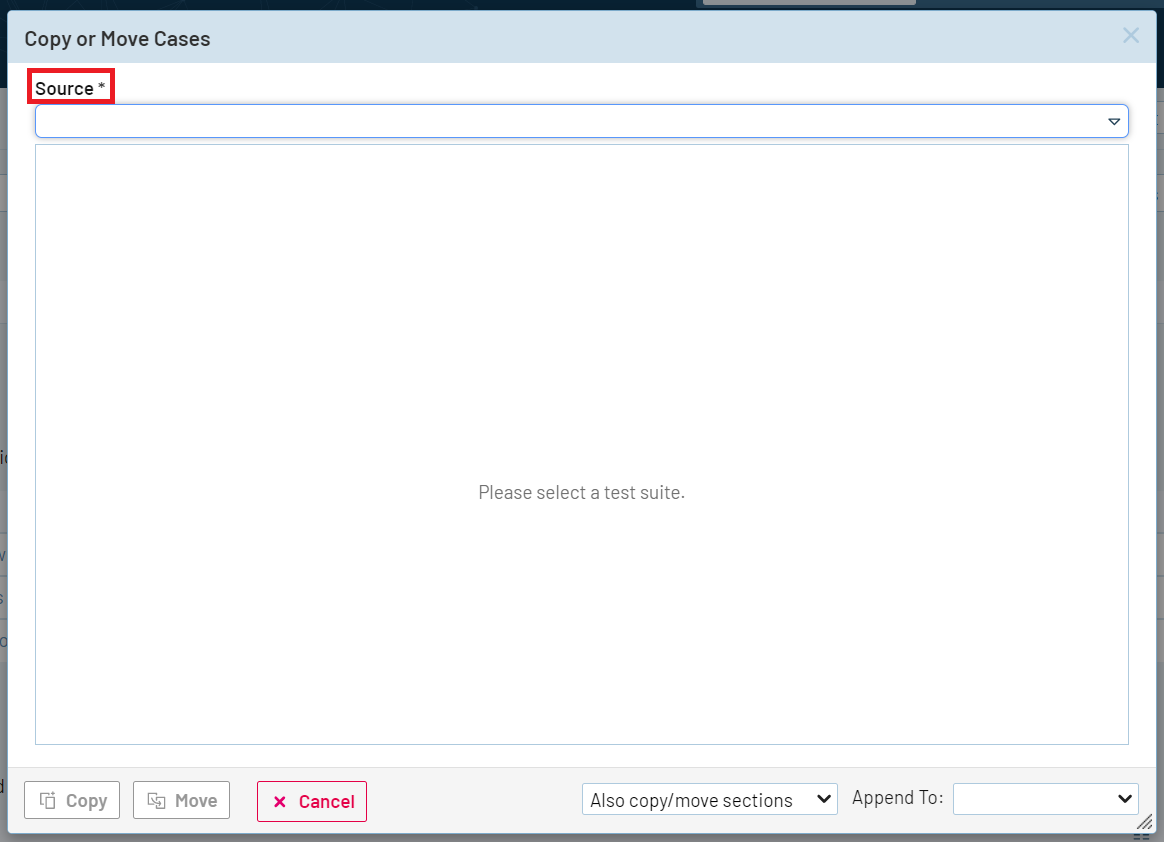 You can select the section and test cases in the ‘Copy or Move cases’ dialog and also select if you want to copy/move test cases or sections or sections+parents. 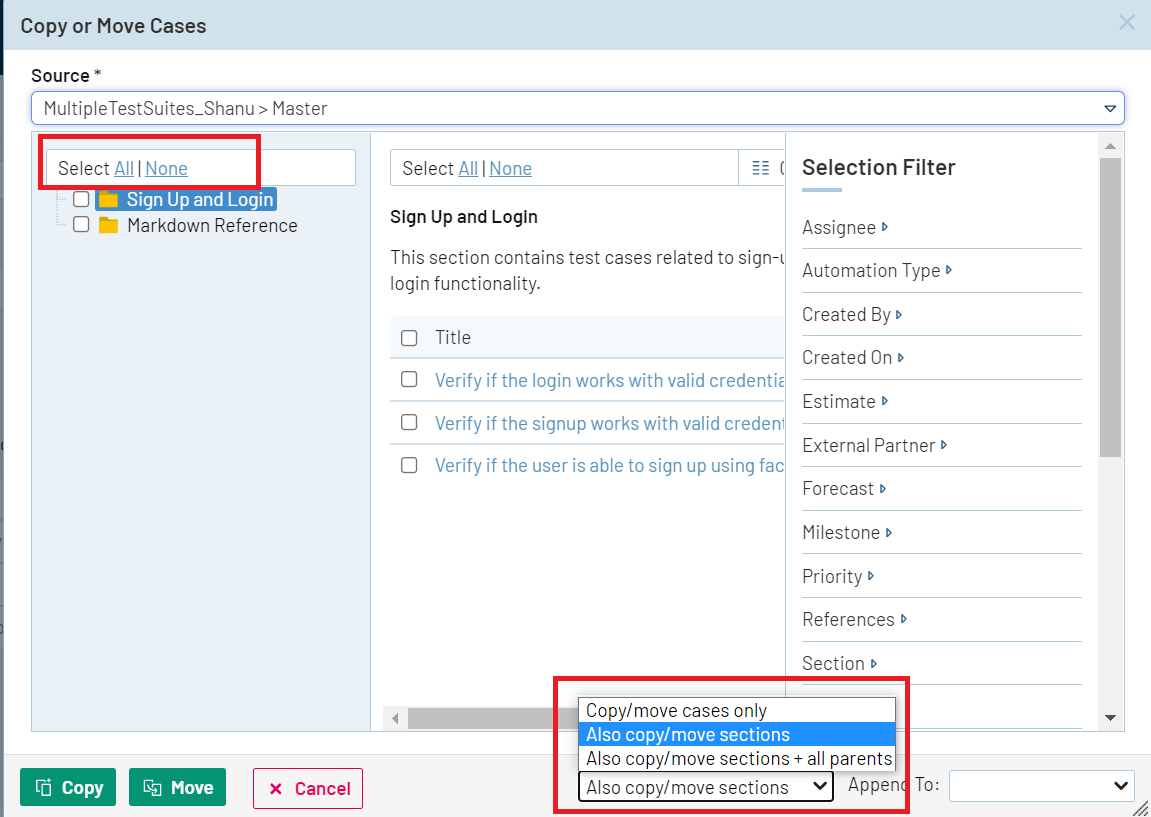 In some cases, you will want to copy (or clone) test cases from one section, test suite, or project to another. When you make a copy of a test case, TestRail duplicates the test case exactly as-is at the time of copying, including all field values, test results and history, and linked defects. Changes made to the original test case will not persist to copies of the test case made before the changes.

Copy/clone a single test case within the same project

To copy or clone a single test case, you can drag & drop the case from the test case repository list, or simply press and hold the Shift key during the operation. To do this, simply drag the little grip icon on the left of the checkboxes.

Copy/clone a test case section within the same project

To copy or clone an entire section within a test suite, you can drag & drop a section/s or simply press the Shift key before and during the operation in the sidebar. 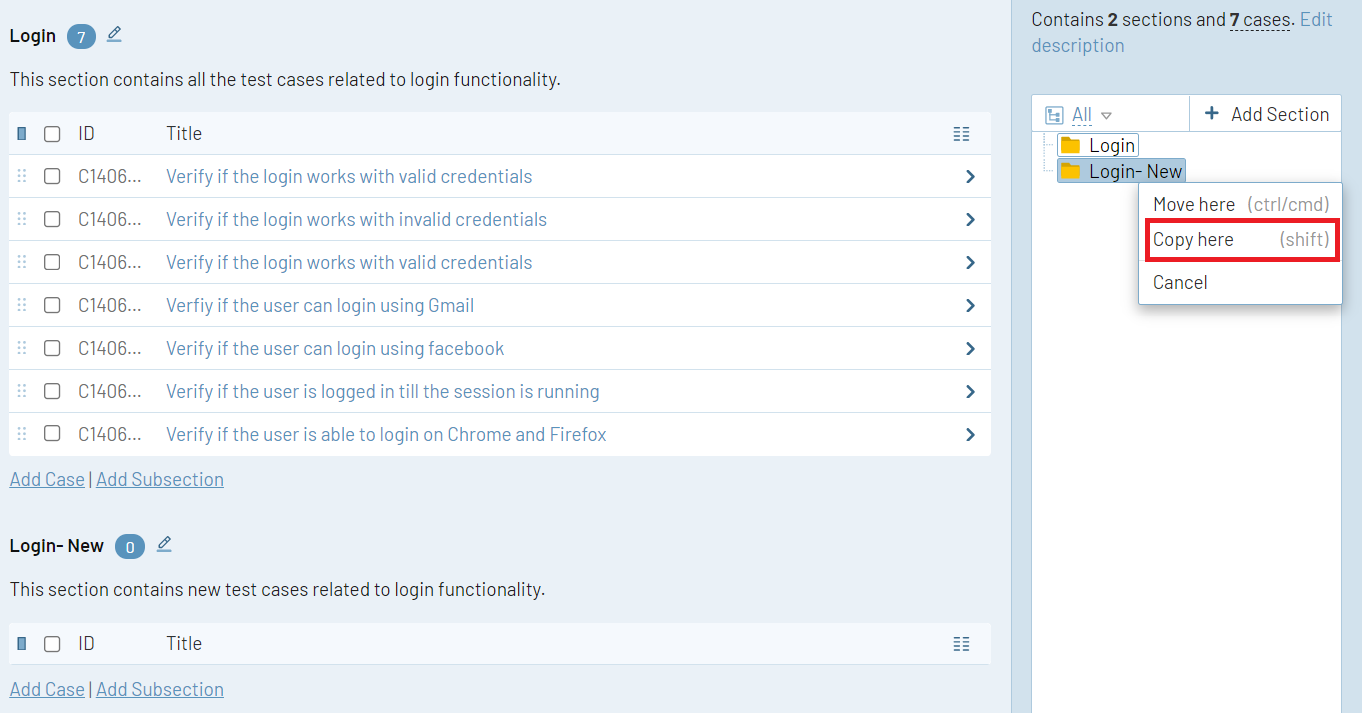 If you want to copy or clone test cases or entire sections from another test suite, simply open the Copy or Move dialog from the toolbar of a test suite (it’s the little icon with two sheets of paper in the toolbar). You can also use this dialog to duplicate entire test suites.

Copy/clone test cases into a baseline

Deleting test cases will delete any associated tests from open test runs and plans. Users can delete test cases by marking them as deleted, or permanently and immediately deleting them. Test cases marked as deleted will be hidden from TestRail, but will be restorable for 7, 14, or 30 days. This can be configured by a TestRail administrator inside Administration > Site Settings > User Interface. Test cases permanently deleted will be immediately removed from the TestRail database and cannot be recovered without a full database restore. 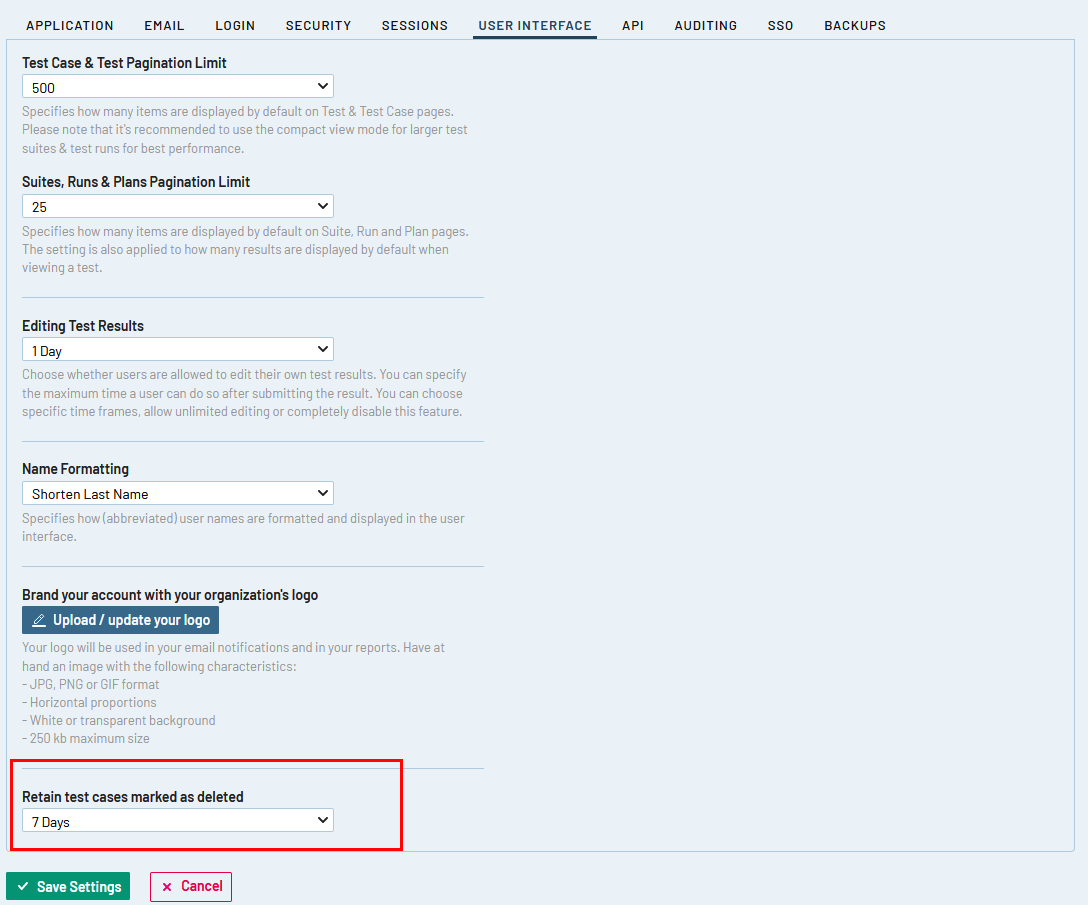 When marking test cases as deleted, the test cases are placed in a deleted state, removing them from test runs and plans, but keeping them in the TestRail database. You can show or hide these deleted test cases in the UI by toggling the button shown here: 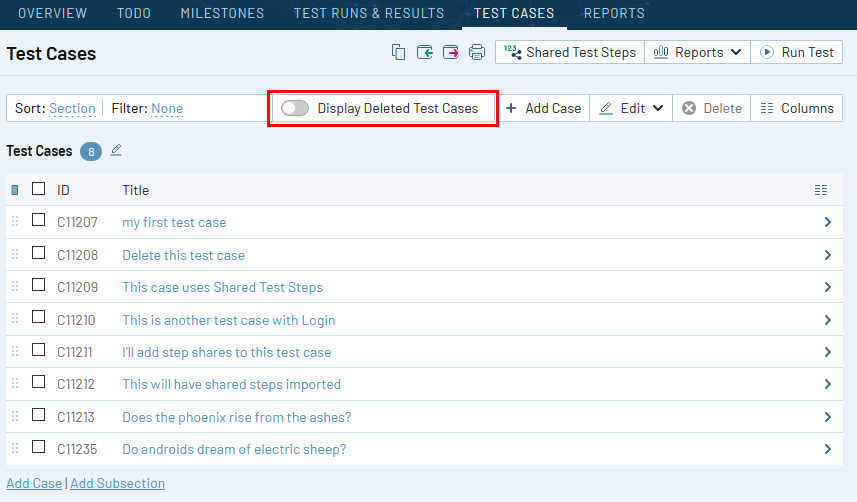 From the time test cases are marked as deleted and until the configured retention period passes, Test cases in this deleted state can be restored in a few ways:

How to Bulk Restore Cases Marked as Deleted

If you have marked test cases as deleted and they have not been deleted permanently yet, you can restore them in bulk through the following process.